Brahmi: The Herb of Grace

Brahmi is also known to be an adaptogen, increasing the body's ability to handle stress, anxiety, and fatigue. Brahmi is one of the herbs that can successfully compete with the medicinal qualities of ginkgo biloba. It is believed that mankind has known about the amazing healing qualities of Brahmi for well over 3,000 years. A creeping, perennial plant also known as Indian Pennywort, Brahmi is considered a weed in many parts of India, as it grows in marshlands, and along the banks of rivers and lakes. Its taste resembles that of parsley, with more bitterness. The entire plant, including the roots, stems, and especially the leaves can be used for medicinal purposes.

Ayurveda is a system of Hindu traditional medicine that has been in practice for at least 8,000 years in India. Translated from the ancient language of Sanskrit, Ayurveda is considered the "Science of Life" or "Wisdom of Life." Unlike modern medicine, Ayurveda takes a holistic approach to healing that encompasses our natural environment and all aspects of our physical body, emotions, and even personality traits.  Ayurveda is the world's oldest comprehensive health care system in the world, as this ancient art of healing is rooted in the Vedas, an ancient book of knowledge in India that dates back to 3000 BC. Not only is Ayurveda a comprehensive medical system but also a way of life that takes into account the health of the mind, body, and spirit. The goal of Ayurveda is rejuvenation—so that the human body, mind, and spirit can be maintained in optimal function and healthy harmony despite age. It is believed that when this happens, a human being can truly aspire to the greatest of human goals which is to connect consciousness with life force. Ayurveda remains one of the most recognized and widely practiced disciplines of alternative medicine in the world. It is commonly practiced in conjunction with yoga, meditation, panchakarma, breathing exercises, and herbal medicine. 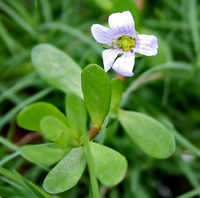 Interestingly, this connection with life force that we all strive for, is known as "Brahman," the sanskrit name for Brahmi which literally translates to the "Divine Goddess of Harmonious Creativity." Brahmi is one of the most important nervine herbs used in Ayurvedic medicine, having been used as a valuable tonic to enhance the spirit, mind, and intellect for thousands of years. Brahmi was well known and used by the great sages of Indian philosophy, who gave it its name of 'knowledge.' The medicinal qualities of Brahmi were initially described sometime around the 6th century A.D. in texts such as the Charaka Samhita as a "medhya rasyana"—a class of herbs traditionally taken to sharpen the intellect and reduce mental disorders. It is claimed that ancient Vedic scholars would take Brahmi to memorize lengthly sacred hymns and scriptures. As an herbal medicine, Brahmi is best known for its ability to enhance neurological function by enhancing long-term memory, verbal articulation, and preventing senile decay. As an adaptogen, Brahmi has been used in India as an herb that is known to by age-defying, assisting in the regeneration of nerve tissues that support memory and mental acuity. Adaptogens are a set of powerful herbs that are known to alleviate stress by adapting their response to the body's individual needs, either mental or physical. Consuming adaptogens, such as Brahmi, is thought to expand our awareness of the concepts of life past our conditioned belief systems so that we can enhance both our cognitive power and longevity.

In a well-known book, "The Practice of Ayurveda," Swami Sivanda describes an amazing treatment called Brahmi Kalpa. This treatment, a form of kaya kalpa, combines the practice of panchakarma followed by 45 days of Brahmi leaf juice taken with fresh cow's milk. This treatment was believed to restore the aged and debilitated body back to pristine youth and vigor by reestablishing the full potential of good health, as well as prolonging and improving the quality of life. Believed to help one preserve youth, it is also believed that sages of Indian lore such as Chyavana, were able to renew their vigor and live countless more years by undergoing a kaya kalpa treatment with Brahmi. This treatment also promises to balance all three doshas and is believed to cure many incurable neurological diseases.

Used in both yoga and meditation, Brahmi is known to improve bodily and mental focus and concentration by activating the crown chakra at the top of the head by balancing both the left and right hemispheres of the brain. Traditionally taken as a tea, Brahmi would be used before either of these practices in order to overcome anxiety, lethargy and mind chatter that often surfaces in the mind during meditation. Brahmi is a powerful herb and brain tonic that has been used by yogis to promote calm and mental clarity for ages. Another common translation of Brahmi from Sanskrit is the "Herb of Grace," as it promotes balance and harmony in all mental and bodily practices.

Despite Brahmi's long standing use in traditional medicines, it is only recently that its many health benefits have been confirmed by modern science. Recent studies have shown that Brahmi can be used to alleviate symptoms of several neurological disorders such as Alzheimer's Disease, Schizophrenia, and Epilepsy.  In the case of Alzheimer's, for instance, studies have found that Brahmi's high level of plant antioxidant compounds can work in the brain by protecting against the neural oxidative stress that is associated with this common disease. One of these active compounds known as 'Bacoside A' appears to protect areas of the brain that is responsible for the uptake of serotonin as well as balance this important neurotransmitter. This level of protection is particularly beneficial in combatting the chemical changes that happen in the brain with diseases such as Epilepsy.

In conjunction with offering nutritional support for several neurological diseases, Brahmi has also shown amazing results in boosting memory and combatting against aging. Boosting cognitive function, improving verbal learning, reducing stress, and increasing levels of multi-tasking and long-term memory are only a few of the benefits of using Brahmi medicinally. Some studies have even shown that long-term use of Brahmi may decrease the effects of aging on the brain. As an adaptogen, Brahmi is also known to promote relaxation by reducing stress, depression and inflammation–particularly in the liver. While modern medicine and traditional Ayurvedic wisdom are only beginning to join forces, it is important to remember that its many medicinal uses have not been evaluated to prevent or cure any disease. However, it is exciting to think about the possibilities of healing and rejuvenation that come along with using traditional herbal medicines such as Brahmi.

Solay Superfood's newest superfood ingredient, Brahmi, has been added to a new cacao elixir, "Focus." Focus Elixir is a syngerstic blend of raw cacao with cognitive enhancing super herbs such as Brahmi, American Ginseng, Gotu Kola and Green Tea. It's health benefits include reducing stress while focusing energy and thoughts with enhanced clarity, as well as providing an uplifting mood boost.