“Grow up.” – Stories of a new generation. 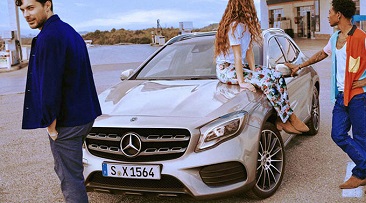 Between adulthood and philistinism.

With more than 100 moving-image sequences and over 90 lifestyle and product images, stories of a new generation will be told until the end of this year. The campaign focuses on people caught between the coolness of adolescence and the squareness of adulthood who embody the attitude to life of the new compacts. One of the main characters is the US rapper A$AP Rocky. The campaign launches in early March 2017. On the internet, those who are interested can visit www.mercedes-benz.com/growup not just for in-depth product information, but also for flexible content additions from the individual markets, such as the integration of the “WhiteArt Edition” special models.

“‘Grow up.’ is much more than a major campaign about a model series. It is a further move forward by the brand as a whole towards more modernity, progressivism and dynamism across the entire brand identity of Mercedes-Benz,” says Dr. Jens Thiemer, Vice President Marketing Mercedes-Benz Cars, outlining the goal of the campaign. “With ‘Grow up.’, we are reinterpreting traditional values and attitudes towards Mercedes-Benz while showcasing their modern-day interpretation and relevance within the Generations X and Y. Realised in collaboration with our agency antoni, ‘Grow up.’ is an unconventional campaign, which, in terms of its consistent digital focus and the mechanics of its content, does not immediately come across as advertising.”

Under the campaign hub www.mercedes-benz.com/growup, the campaign centres around five films that stand for the five models of the compact-car family. They tell stories about young people and present-day adolescence with all the associated highs and lows. One film, for example, is about two girlfriends who, after an argument followed by months of silence, realise that true friendship is something precious that can also survive difficult times. Directed by the award-winning Swedish director Gustav Johansson, the films present images with a young, authentic look. With no artificial light or staged posing, the vehicles are included in the action in a way that seems natural. The campaign is therefore surprising and describes the world of Mercedes-Benz designed to make a young, self-assured generation of “grown ups” enthusiastic about the brand.